The Federal Capital Territory (FCT) Commissioner of Police Bala Ciroma and his Enugu State counterpart Ahmad Abdulrahman are among names being considered for chairmanship of the Economic and Financial Crimes Commission (EFCC), Dateline Nigeria has learnt.

The current acting chairman of the anti-graft agency Ibrahim Mustapha Magu is being probed over allegations levelled against him by the Attorney General of the Federation (AGF) and Minister of Justice Abubakar Malami.

Magu has since been suspended to allow the Justice Ayo Salami-led panel to do its work unhindered, sources told Dateline Nigeria on Tuesday. His houses were also searched by security agents.

President Muhammadu Buhari, the sources added, did not ask the most senior person at the EFCC to take charge because a replacement may likely be named “before the week runs out.”

Meanwhile, multiple sources informed Dateline Nigeria that the choice of Magu’s replacement has been narrowed to Ciroma and Abdurrahman, both of them former heads of operations at the EFCC.

“A number of people have been nominated but the two police commissioners [of FCT and Enugu] seem to be favoured presently because of their backgrounds and having worked with the anti-corruption agency,” one of the sources said.

“Some of the people being suggested are retirees and may not have the energy to steer the affairs of the commission. One of them is retired DIG (training and development) Sani Mohammed. They have also not worked with the EFCC, which is another minus for them. In the end, however, only the president will decide,” another source said.

Ciroma holds a Bachelor of Science (B.Sc) degree in Geography from the University of Maiduguri and joined the Nigeria Police Force in March 1990 as a Cadet Assistant Superintendent of Police (ASP).

He has attended several local and foreign courses. He is an alumni of Hong Kong University where he bagged a Post Graduate Certificate in Corruption Studies. He is a member of Certified Fraud Examiner (CFE).

On the other hand, Abdurrahman holds a double Masters Degrees – one in Criminal Justice and another in Conflict, Peace & Strategic Studies – from the Kaduna State University.

CP Ahmad was once the Commissioner of Police in charge of Intelligence at the FCID, Abuja.

He enlisted into the force as Cadet Assistant Superintendent of Police (ASP) on March 3, 1990 and trained at Police College, Kaduna.

He was also at the EFCC as head of operations.

Some provisions of the EFCC Act

The EFCC Act provides for a chairman who shall

(i) Be the Chief Executive and Accounting Officer of the Commission

(ii) Be a serving or retired member of any government security or law enforcement agency not below the rank of Assistant Commissioner of Police or equivalent; and

Section 3(1) of the EFCC Act also states: “The Chairman and members of the Commission other than ex-officio members, shall hold office for a period of four years and may be re-appointed for a further term of four years and no more.”

(2) A member of the Commission may at any time be removed by the President for inability to discharge the functions of his office (whether arising from infirmity of mind or body or any other cause) or for misconduct or if the President is satisfied that it is not in the interest  of  the  Commission  or  the  interest  of  the  public  that  the  member  should  continue in office. 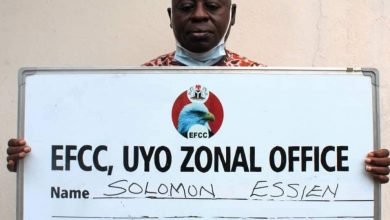